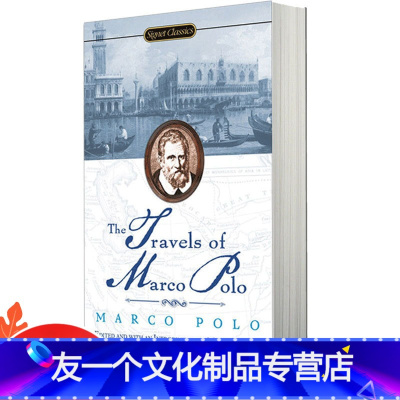 Travels of Marco Polo《马可波罗游记》是意大利有名旅行家和商人马可·波罗撰写的关于其东游的沿途见闻，这是人类历史上西方人感知东方的首部著作，它向整个欧洲打开了神秘的东方之门。书中记录了中亚，西亚，东南亚等地区的许多国家的情况，而其重点部分则是关于中国的叙述，这些叙述在中古时代的地理学史，亚洲历史，中西交通史和中意关系史诸方面，都有着重要的历史价值，不仅是研究历史者的灯塔，为人们对元史的研究提供了一幅生动真实的社会经济生活画卷，也是一部地理学的重要指南。 本书为Signet Classics推出的英文版，内容无删节，内附马可波罗东游路线图，体积轻盈小巧，方面随身携带，适合有一定英文水平的英语学习者，历史地理爱好者阅读。 His journey through the East began in 1271—when, still a teenager, he set out of Venice and found himself traversing the most exotic countries. His acceptance into the court of the great emperor Kublai Khan, and his service to the vast and dazzling Mongol empire, led him to places as far away as Tibet and Burma, lands rich with gems and gold and silk, but virtually unknown to Europeans. Later, as a prisoner of war, Marco Polo would record the details of his remarkable travels across harsh deserts, great mountain ranges, and dangerous seas, as well as of his encounters with beasts and birds, plants and people. His amazing chronicle is both fascinating and awe-inspiring—and still serves as the most vivid depiction of the mysterious East in the Middle Ages. EDITED AND WITH AN INTRODUCTION BY MILTON RUGOFF AND AN AFTERWORD BY HOWARD MITTELMARK

Marco Polo’s account of his journey throughout the East in the thirteenth century was one of the earliest European travel narratives, and it remains the most important. The merchant-traveler from Venice, the first to cross the entire continent of Asia, provided us with accurate descriptions of life in China, Tibet, India, and a hundred other lands, and recorded customs, natural history, strange sights, historical legends, and much more. From the dazzling courts of Kublai Khan to the perilous deserts of Persia, no book contains a richer magazine of marvels than the Travels.

INTRODUCTION PRINCIPAL FIGURES OF THE HOUSE OF GENGHIS KHAN MAP: Travels of Marco Polo PROLOGUE BOOK I Of Regions Visited or Heard of on the Journey from Lesser Armenia to the Court of the Great Khan at Shangtu BOOK II Of the Great Kublai Khan and of Provinces Visited on Journeys Westward and Southward BOOK III Of the Sea of Chin and the Great Island of Zipangu, Which Lies to the East of Cathay, and of the Islands of Java, Angaman and Zeilan, Which Are in Lesser India. Of Greater India, the Richest and Noblest Country in the World. Of the Islands of the Males and the Females, Socotra, Madagascar, and Zanzibar, and the Provinces of Abyssinia and Aden, Which Comprise Middle India BOOK IV Of the Region of Darkness, the Province of Russia, Great Turkey, and the War Between the Tartars of the West and the Tartars of the East AFTERWORD INDEX

Marco Polo(1254–1324) was the son of a Venetian merchant and traveler. In 1271, Marco, with his father and uncle, began a journey that four years later led to their being accepted at the court of Kublai Khan. During these years, they traveled extensively in Persia and China, through regions almost totally unknown to the Western world. In service to the Khan, Marco explored Tibet and Burma and many of the remote provinces of China; it is possible that he went to the southern parts of India as well. Participating in a military conflict between Genoa and Venice, he was taken prisoner in 1298. While in captivity, he dictated the Travels of Marco Polo to a fellow prisoner. Milton Rugoffwas a longtime editor for several publishing houses. He is the author of a number of books, including A Harvest of World Folk Tales, Marco Polo’s Adventures in China, The Great Travelers, and The Beechers: An American Family in the Nineteenth Century, which was nominated for an American Book Award in 1982. Howard Mittelmarkis writer, editor, and book critic. He lives in New York City.

In beginning the description of the countries Marco Polo visited in Asia, and of things which he observed therein, it is proper to distinguish two Armenias, the Lesser and the Greater. The king of Lesser Armenia dwells in a city called Sebastoz, and rules his dominions with strict justice. The towns, fortified places, and castles are numerous. There is an abundance of all the necessities of life, as well as of those things which contribute to comfort. Game, both beasts and birds, is plentiful. It must be said, however, that the air of the country is not remarkably healthy. In former times its gentry were esteemed expert and brave soldiers; but at the present day they are great drinkers, mean-spirited, and worthless. On the seacoast is a busy city named Layas. Its port is frequented by merchants from Venice, Genoa, and many other places, who trade in spices and drugs of different sorts ,silk and wool, and other rich commodities.