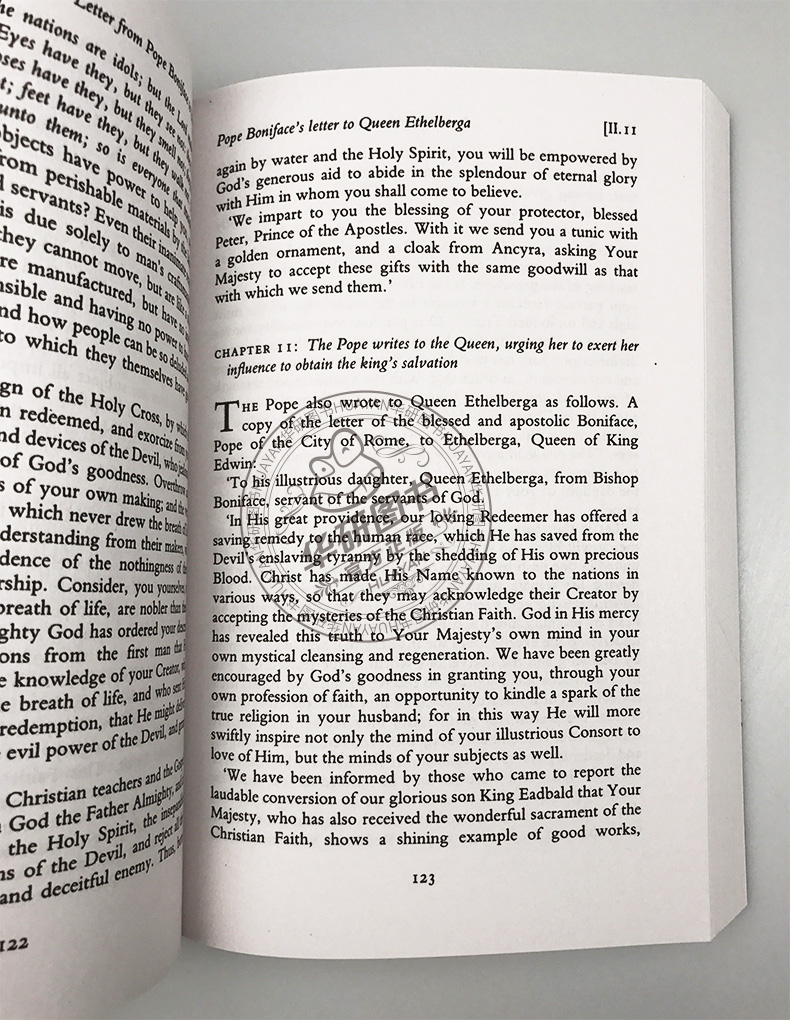 'With God's help, I, Bede ... have assembled these facts about the history of the Church in Britain ... from the traditions of our forebears, and from my own personal knowledge'
Written in AD 731, Bede's Ecclesiastical History of the English People is the first account of Anglo-Saxon England ever written, and remains our single most valuable source for this period. It begins with Julius Caesar's invasion in the first century BC and goes on to tell of the kings and bishops, monks and nuns who helped to develop government and convert the people to Christianity during these crucial formative years. Relating the deeds of great men and women but also describing landscape, customs and ordinary lives, this is a rich, vivid portrait of an emerging church and nation by the 'Father of English History'.
Leo Sherley-Price's translation from the Latin brings us an accurate and readable version of Bede's History. This edition includes Bede's Letter to Egbert, denouncing false monasteries; and The Death of Bede, an admirable eye-witness account by Cuthbert, monk and later Abbot of Jarrow, both translated by D. H. Farmer.

Ecclesiastical History of the English People《英吉利教会史》以罗马天主教会在不列颠的布教为主要内容，记述自奥古斯丁（Augustin）受命来不列颠布教开始直到罗马天主教在各国相继取得胜利前后一百余年的历史。全书五卷，如金氏（J.E.King）所指出，主要是依据教会的重大事件来划分的。对于七国的政治史，叙述则较简单。至于这一时期的社会状况，作者并未在意，只是在字里行间透露出少量消息。

Bede(c. 672 or 673 – May 25, 735), was a Benedictine monk at the Northumbrian monastery of Saint Peter at Monkwearmouth, today part of Sunderland, and of its companion monastery, Saint Paul's, in modern Jarrow (see Wearmouth-Jarrow), both in the English county of Durham (now Tyne and Wear). He is well known as an author and scholar, and his most famous work, Historia ecclesiastica gentis Anglorum (The Ecclesiastical History of the English People) gained him the title "The father of English history".

BRITAIN, formerly known as Albion, is an island in the ocean, lying towards the north west at a considerable distance from the coasts of Germany, Gaul, and Spain, which together form the greater part of Europe. It extends 8oo miles northwards, and is 200 in breadth, except where a number of promontories stretch further, so that the total coastline extends to 3600 miles. To the south lies Belgic Gaul, to whose coast the shortest crossing is from the city known as Rutubi Portus, which the English have corrupted to Reptacaestir. The distance from there across the sea to Gessoriacum,2 the nearest coast of the Morini, is fifty miles, or, as some have written, 450 furlongs. On the opposite side of Britain, which lies open to the boundless ocean, lie the isles of the Orcades.3 Britain is rich in grain and timber; it has good pasturage for cattle and draught animals, and vines are cultivated in various localities. There are many land and sea birds of various species, and it is well known for its plentiful springs and rivers abounding in fish. Salmon and eels are especially plentiful, while seals, dolphins, and sometimes whales are caught. There are also many varieties of shell—fish, such as mussels, in which are often found excellent pearls of several colours, red, purple, violet, and green, but mainly white. Whelks are abundant, and a beautiful scarlet dye is extracted from them which remains unfaded by sunshine or rain; indeed, the older the cloth, the more beautiful its colour. The country has both salt springs and hot springs, and the waters flowing from them provide hot baths, in which the people bathe separately according to age and sex. As Saint Basil says: ‘Water receives heat when it flows across certain metals, and becomes hot, and even scalding.’ The land has rich veins of many metals, including copper, iron, lead, and silver. There is also much jet of fine quality, a black jewel which can be set on fire and, when burned, drives away snakes and, like amber, when it is warmed by friction, it holds fast whatever is applied to it. In old times, the country had twenty-eight noble cities, besides innumerable strongholds, which also were guarded by walls, towers, and barred gates.
Since Britain lies far north toward the pole, the nights are short in summer, and at midnight it is hard to tell whether the evening twilight still lingers or whether dawn is approaching, since the sun at night passes not far below the earth in its journey round the north back to the east. Consequently the days are long in summer, as are the nights in winter when the sun withdraws into African regions, as long in fact as eighteen hours, whereas the summer nights and winter days are very short, and last only six hours. In Armenia, Macedconia, and Italy, and other countries of that latitude, the longest day or night lasts only fifteen hours and the shortest nine.