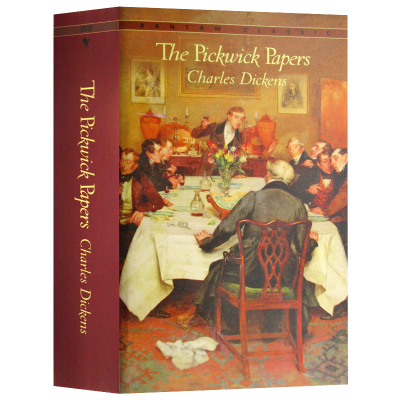 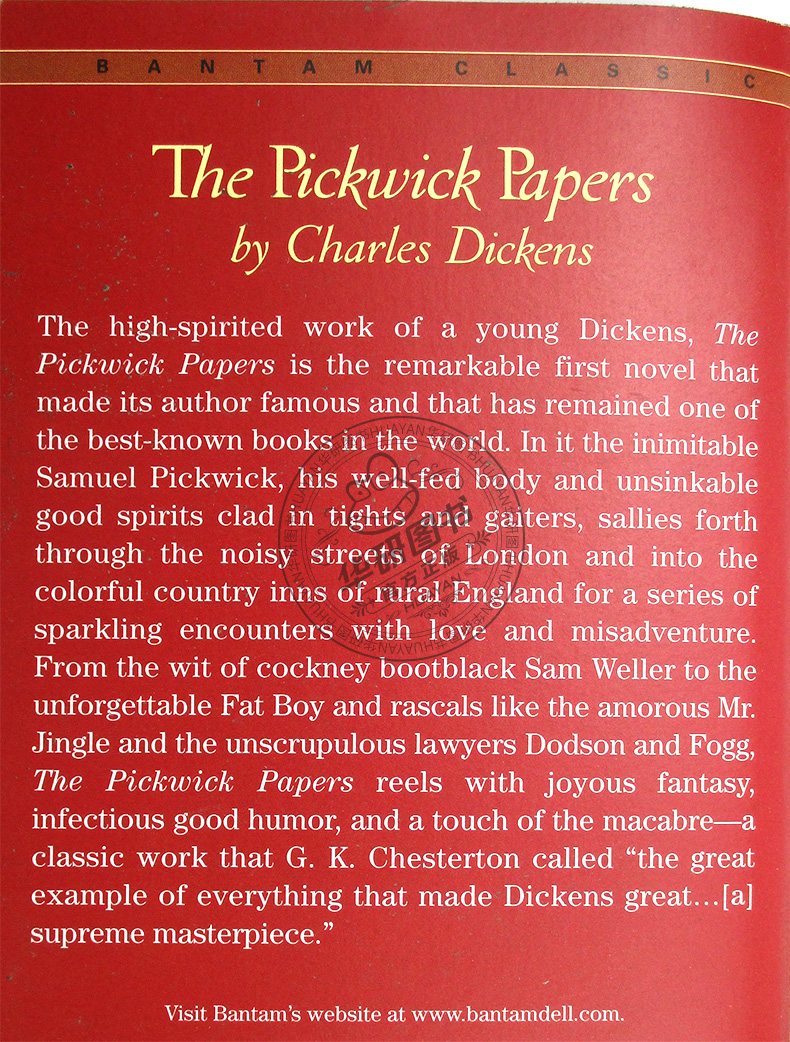 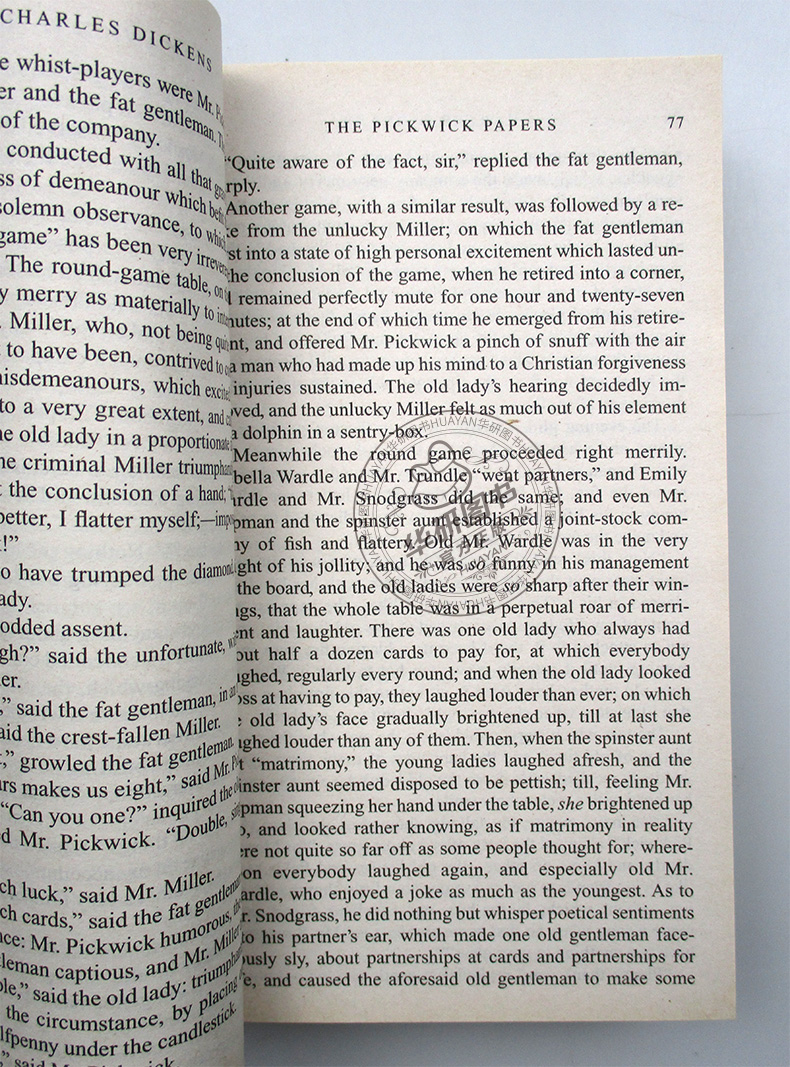 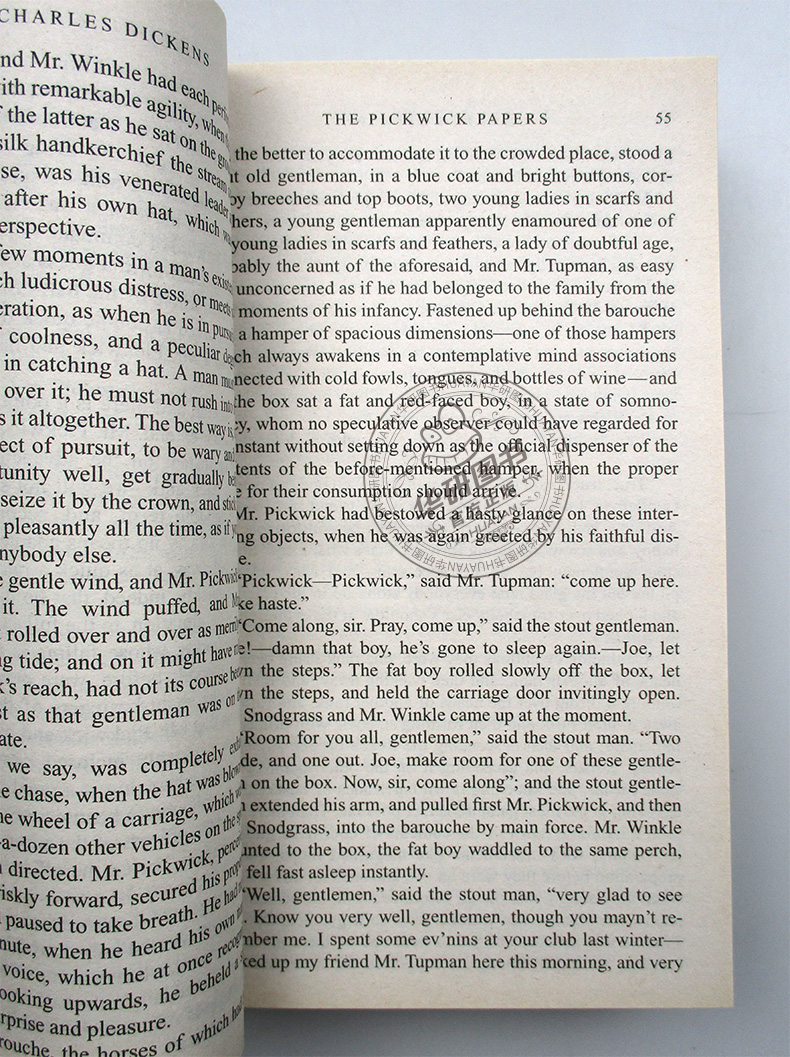 The Pickwick Papers《匹克威克外传》是英国大文豪查尔斯·狄更斯的首部长篇小说，也是其成名作，被誉为英国版的“《堂吉诃德》”。这部既富于浪漫奇想又紧贴社会现实的幽默与讽刺小说，主要讲述的是天真善良、不谙世事的有产者匹克威克带领其信徒们在英国各地漫游的奇趣经历与所见所闻，历来被视为英国流浪汉小说的代表作。此外，这本书也是英国著名作家毛姆读书随笔推荐书目之一。
本书为Bantam Classics出版的英文版，内容完整无删节，适合有一定英文基础的文学爱好者阅读。
The high-spirited work of a young Dickens, The Pickwick Papers is the remarkable first novel that made its author famous and that has remained one of the best-known books in the world. In it the inimitable Samuel Pickwick, his well-fed body and unsinkable good spirits clad in tights and gaiters, sallies forth through the noisy streets of London and into the colorful country inns of rural England for a series of sparkling encounters with love and misadventure. From the wit of cockney bootblack Sam Weller to the unforgettable Fat Boy and rascals like the amorous Mr. Jingle and the unscrupulous lawyers Dodson and Fogg, The Pickwick Papers reels with joyous fantasy, infectious good humor, and a touch of the macabre—a classic work that G. K. Chesterton called “the great example of everything that made Dickens great…[a] supreme masterpiece.”

The Pickwick Papers《匹克威克外传》说的是匹克威克先生以及他的朋友和跟班出外旅行的经历。他们原本为了增长见识，去国内各处游历。在这过程中，他们接触到了现实生活的各个方面。他们天真幼稚，善良轻信，遇到了许多麻烦，陷入到种种不愉快的境地之中。小说围绕两个主题展开，前半部谈的主要是匹克威克同流氓冒险家金格尔的斗争，后半部写的主要是房东巴德尔太太指控匹克威克毁弃婚约的诉讼案件。匹克威克先生尽管屡次受到金格尔的欺骗，吃了一次又一次的苦头，但在金格尔走投无路之时，还是伸出援手，帮助他改恶从善，重新做人。而在巴德尔太太一案中，匹克威克先生饱受诡计多端、贪得无厌的恶律师道孙和福格的讹诈，并受到不公正的判决，但他坚持原则，不肯妥协，然后被关进监狱。狱中服刑的经历使他看到了司法制度的黑暗场面。全书结尾时匹克威克出狱后退隐回家，过上了安宁的生活。
This novel, written when Dickens was only 25 years old, immediately brought him immense popularity. Presenting a host of now-classic characters in a series of adventures, it displays the richness of his skills of characterization and description.
Mr. Samuel Pickwick is general chairman of the Pickwick Club, whose members— Tracy Tupman, Augustus Snodgrass, and Nathaniel Winkle—form a society to report their adventures and observations. From these reports emerge the rascal Jingle and his servant, Job Trotter, Mr Wardle in his hospitable Dingley Dell, the engaging Sam Weller, the greedy drunkard Stiggins, and many more of Dickens’s best-loved characters.

查尔斯·狄更斯（Charles Dickens，1812～1870），1812年生于英国的朴次茅斯。15岁时，狄更斯在一家律师事务所当抄写员并学习速记，此后，又在报社任新闻记者。在《记事晨报》任记者时，狄更斯开始发表一些具有讽刺和幽默内容的短剧，主要反映伦敦的生活，逐渐有了名气。他了解城市底层人民的生活和风土人情，这些都体现在他热情洋溢的笔端。此后，他在不同的杂志社任编辑、主编和发行人，其间发表了几十部长篇和短篇小说，主要作品有The Pickwick Papers《匹克威克外传》、Oliver Twist《雾都孤儿》、The Old Curiosity Shop《老古玩店》、Hard Times《艰难时世》、Our Mutual Friend《我们共同的朋友》、A Tale of Two Cities《双城记》等。
Charles Dickens was born on February 7, 1812, in Landport, Portsea, England. He died in Kent on June 9, 1870. The second of eight children of a family continually plagued by debt, the young Dickens came to know not only hunger and privation, but also the horror of the infamous debtors’ prison and the evils of child labor. A turn of fortune in the shape of a legacy brought release from the nightmare of prison and “slave” factories and afforded Dickens the opportunity of two years’ formal schooling at Wellington House Academy. He worked as an attorney’s clerk and newspaper reporter until his Sketches byBoz (1836) and The Pickwick Papers(1837) brought him the amazing and instant success that was to be his for the remainder of his life. In later years, the pressure of serial writing, editorial duties, lectures, and social commitments led to his separation from Catherine Hogarth after twenty-three years of marriage. It also hastened his death at the age of fifty-eight, when he was characteristically engaged in a multitude of work.

CHAPTER I
THE PICKWICKIANS
The first ray of light which illumines the gloom, and converts into a dazzling brilliancy that obscurity in which the earlier history of the public career of the immortal Pickwick would appear to be involved, is derived from the perusal of the following entry in the Transactions of the Pickwick Club, which the editor of these papers feels the highest pleasure in laying before his readers, as a proof of the careful attention, indefatigable assiduity, and nice discrimination, with which his search among the multifarious documents confided to him has been conducted.
“May 12, 1827. Joseph Smiggers, Esq., P.V.P.M.P.C.,* presiding. The following resolutions unanimously agreed to: —
“That this Association has heard read, with feelings of unmingled satisfaction, and unqualified approval, the paper communicated by Samuel Pickwick, Esq., G.C.M.P.C.,Ý entitled ‘Speculations on the Source of the Hampstead Ponds, with some Observations on the Theory of Tittlebats;’ and that this Association does hereby return its warmest thanks to the said Samuel Pickwick, Esq., G.C.M.P.C., for the same.
“That while this Association is deeply sensible of the advantages which must accrue to the cause of science from the production to which they have just adverted,-no less than from the unwearied researches of Samuel Pickwick, Esq., G.C.M.P.C., in Hornsey, Highgate, Brixton, and Camberwell,-they cannot but entertain a lively sense of the inestimable benefits which must inevitably result from carrying the speculations of that learned man into a wider field, from extending his travels, and consequently enlarging his sphere of observation, to the advancement of knowledge, and the diffusion of learning.
“That, with the view just mentioned, this Association has taken into its serious consideration a proposal, emanating from the aforesaid Samuel Pickwick, Esq., G.C.M.P.C., and three other Pickwickians hereinafter named, for forming a new branch of United Pickwickians, under the title of The Corresponding Society of the Pickwick Club.
“That the said proposal has received the sanction and approval of this Association.
“That the Corresponding Society of the Pickwick Club is therefore hereby constituted; and that Samuel Pickwick, Esq., G.C.M.P.C., Tracy Tupman, Esq., M.P.C., Augustus Snodgrass, Esq., M.P.C., and Nathaniel Winkle, Esq., M.P.C., are hereby nominated and appointed members of the same; and that they be requested to forward, from time to time, authenticated accounts of their journeys and investigations, of their observations of character and manners, and of the whole of their adventures, together with all tales and papers to which local scenery or associations may give rise, to the Pickwick Club, stationed in London.