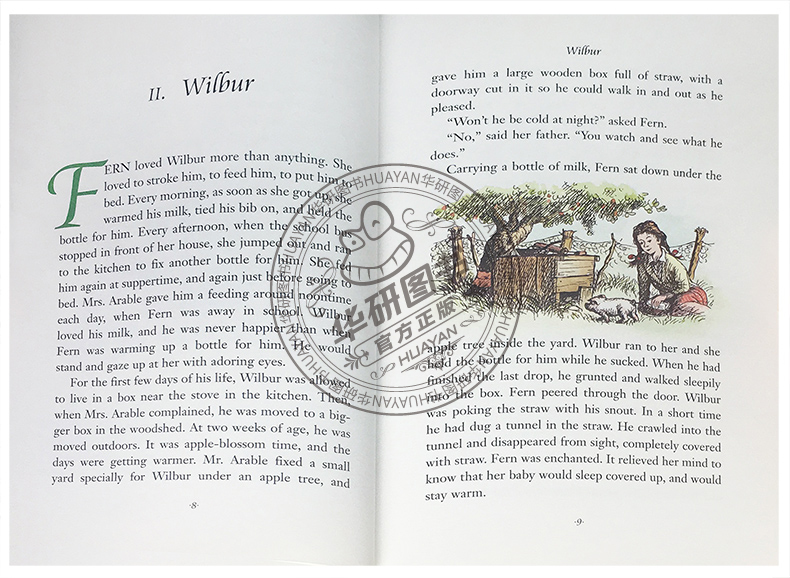 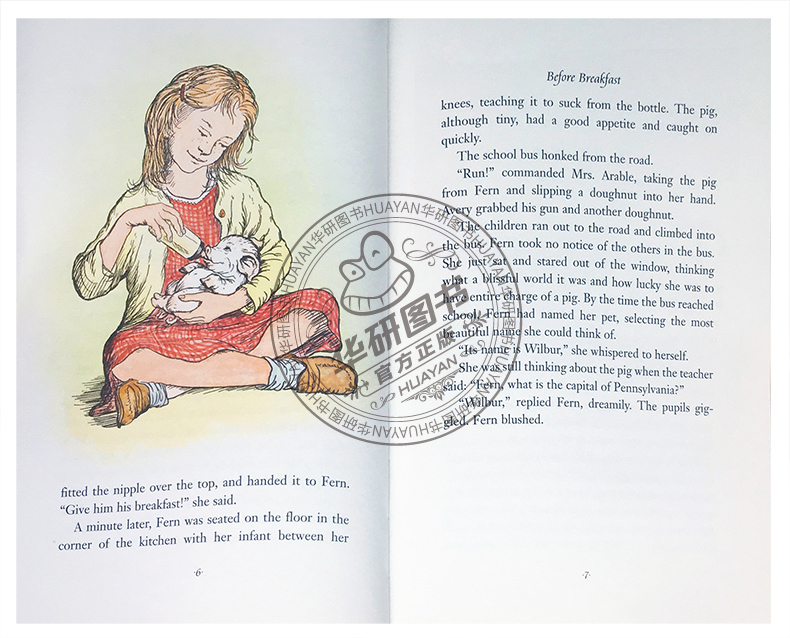 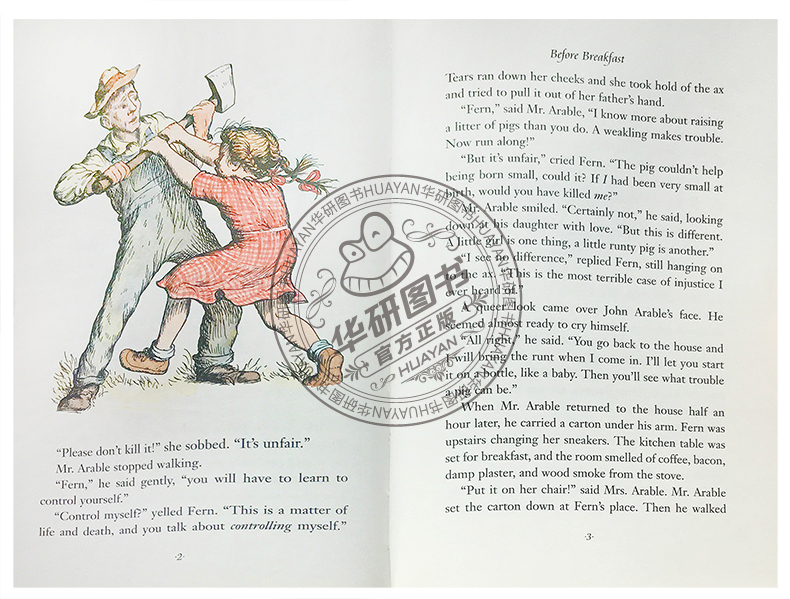 This beloved book by E. B. White, author ofStuart LittleandThe Trumpet of the Swan, is a classic of children’s literature that is “just about perfect.” This high-quality paperback features vibrant illustrations colorized by Rosemary Wells!
Some Pig. Humble. Radiant. These are the words in Charlotte’s Web, high up in Zuckerman’s barn. Charlotte’s spiderweb tells of her feelings for a little pig named Wilbur, who sim wants a friend. They also express the love of a girl named Fern, who saved Wilbur’s life when he was born the runt of his litter.
E. B. White’s Newbery Honor Book is a tender novel of friendship, love, life, and death that will continue to be enjoyed by generations to come. This edition contains newly color illustrations by Garth Williams, the acclaimed illustrator of E. B. White’sStuart Littleand Laura Ingalls Wilder’sLittle Houseseries, among many other books.

Charlotte’s Web: Some Pig. Humble. Radiant. These are the words in Charlotte’s web, high up in Zuckerman’s barn. Charlotte’s spiderweb tells of her feelings for a little pig named Wilbur, who sim wants a friend. They also express the love of a girl named Fern, who saved Wilbur’s life when he was born the runt of his litter. E. B. White’s Newbery Honor Book is a tender novel of friendship, family, and adventure.

E. B. White, the author of such beloved classics asCharlotte’s Web,Stuart Little, andThe Trumpet of the Swan, was born in Mount Vernon, New York. He graduated from Cornell University in 1921 and, five or six years later, joined the staff ofThe New Yorkermagazine, then in its infancy. He died on October 1, 1985, and was survived by his son and three grandchildren.
Mr. White’s essays have appeared in Harper’s magazine, and some of his other books are:One Man’s Meat,The Second Tree from the Corner,Letters of E. B. White,Essays of E. B. White, andPoems and Sketches of E. B. White. He won countless awards, including the 1971 National Medal for Literature and the Laura Ingalls Wilder Award, which commended him for making a “substantial and lasting contribution to literature for children.”
During his lifetime, many young readers asked Mr. White if his stories were true. In a letter written to be sent to his fans, he answered, “No, they are imaginary tales... But real life is only one kind of life—there is also the life of the imagination.”

“Where’s Papa going with the ax?” said Fern to her mother asthey were setting the table for breakfast.

“Out to the hog house,” replied Mrs. Arable. “Some pigs were born last night.”“I don’t see why he needs an ax,” continued Fern, who was onlyeight.
“Well,” said her mother, “one of the pigs is a runt. It’s very small and weak, and it will never amount to anything. So your fatherhas decided to do away with it.” “Do away with it?” shrieked Fern. “You mean kill it? Just because it’s smaller than the others?” Mrs. Arable put a pitcher of cream on the table. “Don’t yell, Fern!” she said. “Your father is right. The pig would probably die anyway.”Fern pushed a chair out of the way and ran outdoors. The grasswas wet and the earth smelled of springtime. Fern’s sneakers were sopping by the time she caught up with her father.
“Please don’t kill it!” she sobbed. “It’s unfair.” Mr. Arable stopped walking.
“Fern,” he said gently, “you will have to learn to control yourself.” “Control myself?” yelled Fern. “This is a matter of life anddeath, and you talk about controlling myself.” Tears ran down hercheeks and she took hold of the ax and tried to pull it out of her father’s hand.
“Fern,” said Mr. Arable, “I know more about raising a litter ofpigs than you do. A weakling makes trouble. Now run along!” “But it’s unfair,” cried Fern. “The pig couldn’t help being born small, could it? If I had been very small at birth, would you have killed me?” Mr. Arable smiled. “Certainly not,” he said, looking down at hisdaughter with love. “But this is different. A little girl is onething, a little runty pig is another.” “I see no difference,” replied Fern, still hanging on to theax. “This is the most terrible case of injustice I ever heard of.”A queer look came over John Arable’s face. He seemed almostready to cry himself.
“All right,” he said. “You go back to the house and I will bringthe runt when I come in. I’ll let you start it on a bottle, like ababy. Then you’ll see what trouble a pig can be.” When Mr. Arable returned to the house half an hour later, hecarried a carton under his arm. Fern was upstairs changing hersneakers. The kitchen table was set for breakfast, and the roomsmelled of coffee, bacon, damp plaster, and wood smoke from thestove.
“Put it on her chair!” said Mrs. Arable. Mr. Arable set the carton down at Fern’s place. Then he walked to the sink and washedhis hands and dried them on the roller towel.
Fern came slowly down the stairs. Her eyes were red from crying.
As she approached her chair, the carton wobbled, and there was a scratching noise. Fern looked at her father. Then she lifted thelid of the carton. There, inside, looking up at her, was the newbornpig. It was a white one. The morning light shone through its ears, turning them pink.